The basement of Owenmore House has been renovated and developed as Owenbeag Tourism Accommodation Facility to offer Self-Catering Accomodation and consists of the following:

Owenmore house originally known as Millbrook was built in the late 1700s in the parish of Moygownagh and was described by the Ordnance Survey Field Name Books record as a ‘neat cottage’ in the townland of Correens. It was built by the Orme family who were Cromwellian settlers who arrived in County Mayo in the mid-1600s. They built houses at Abbeytown Crossmolina, Glenmore, Owenmore & Belville Moygownagh and Orme Lodge in Enniscrone, Co Sligo. They owned substantial areas of land in both County Mayo & County Sligo. The seaweed baths in Enniscrone were also built by the Ormes.

The original house, Millbrook was damaged at the time of the 1798 rebellion when the French arrived in Killala and substantial compensation was received from the UK Government in 1801 amounting to £2,200. The original house was added on to in the 1830’s and became known as Owenmore House.

During the course of the 1800’s a substantial amount of outbuildings were added to Owenmore House including an upper courtyard, a lower courtyard along the river (which includes a mill), a walled garden with gardeners cottage, 5 gate lodges (2 of which still attach to the property) and a lime kiln. Most of the outbuildings are in a state of disrepair. 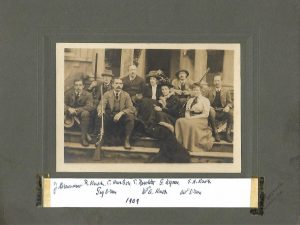 A shooting party from the neighboring country houses on the steps of Owenmore House in 1909. The picture includes Christopher Guy Orme, the last of the original landlord family to own the house. He was a man before his time in many respects, in particular, he installed a hydroelectric plant at the mill using the adjacent Owenmore river, one of the first to be installed in the country. This was used to provide heating for the house up until the mid-2000s when it fell into disuse.

A Guide to Irish Country Houses by Mark Bence Jones says that: –

“Owenmore, Crossmolina, Co Mayo is an early C 19 House of two storeys over a high basement. Entrance front of five bays; single storey Doric portico with die up broad flight of steps. Entablatures on console brackets over windows of lower story. Side elevation of 1 bay with curved bow; at the other side is a 2-storey bowed wing of the same height and style as the main block, set back from it and joined to it by a canted bay. Eaved roof on cornice. 2 drawing rooms en-suite with decoration of ca 1830; ceilings with plaster work in compartments; pediment over double doors. Dining room ceiling with delicate plaster work in centre surrounded by rectangular frame with similar decoration.”

The Landed Estates Database of NUI Galway refers to:

Owenmore or Millbrook (H242)
Ordnance Survey Field Name Books record a ‘neat cottage’ in the townland of Correens, built in 1796 and called Millbrook. Irish Tourist Association File records Owenmore as the residence of the Misses Knox in 1942, erected about 1830 by the Orme family. The house belonged to the McCausland family in the latter part of the 20th century. Now owned by Jerry O’Mara.

Jerry O’Mara has owned the property since 1990 and over the years he has been redecorating Owenmore House. In 2021 he commenced development of the basement which had been used as a storage area up until then. In the late 1960’s a former owner of the house had it rewired and installed a heating system which used the basement to house the equipment required. There were surface pipes and wires everywhere down there so the basement looked like an industrial unit. As part of the renovation work those old wires and pipes have been removed and it has been completely rewired and replumbed. The ceilings of the basement are all vaulted in rendered brick, with a large dome vault over the hallway.

You can find out more about which cookies we are using or switch them off in settings.

This website uses cookies so that we can provide you with the best user experience possible. Cookie information is stored in your browser and performs functions such as recognising you when you return to our website and helping our team to understand which sections of the website you find most interesting and useful.

Strictly Necessary Cookie should be enabled at all times so that we can save your preferences for cookie settings.

If you disable this cookie, we will not be able to save your preferences. This means that every time you visit this website you will need to enable or disable cookies again.